The Real Impact of Chronic Diseases in America

END_OF_DOCUMENT_TOKEN_TO_BE_REPLACED

Why Men Visit the Doctor Less Than Women

A recent study by Cleveland Clinic highlighted the fact that there is a gender gap when it comes to medical care. Of the men they surveyed, 65 percent said they avoid going to the doctor as ...
END_OF_DOCUMENT_TOKEN_TO_BE_REPLACED
All Posts

The Real Impact of Chronic Diseases in America

Most Americans have an inaccurate idea of the effect chronic diseases have on our nation. Let's uncover the impact on American lives and the economy.

A recent poll shows that a majority of people aren't aware that over half of all Americans are affected by a chronic disease or of the economic impact it has in our country. When thinking about illnesses that impact a person’s health, we often think of common ones such as a cold. For most people, the symptoms and illnesses are typically infrequent and inexpensive to treat. However, what financial burden do Americans experience when they have an illness for an extended period of time? What is the associated cost to manage an illness whose symptoms might come and go for years, requiring constant treatment?

The majority of Americans are aware that the term “chronic disease” includes conditions such as heart disease, diabetes, asthma and mental health illnesses. However, few are cognizant of the sheer number of people affected by these diseases. In a poll conducted by the Kaiser Family Foundation, participants were questioned about their knowledge of people living with chronic diseases. Of the participants, only 29 percent were correct to assume that “more than half” of all Americans currently live with a chronic disease. In addition, a majority of the participants were unaware that “more than three-quarters” of the U.S. healthcare budget is spent treating chronic diseases. 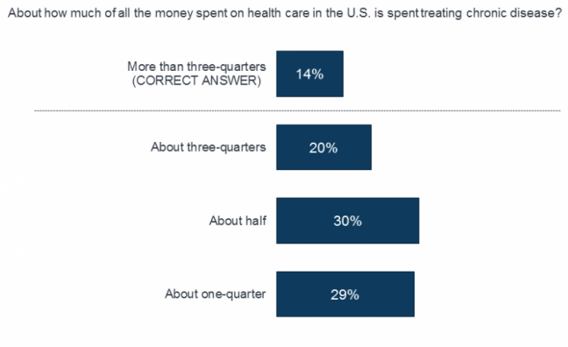 With this data, it’s apparent that most Americans have an inaccurate idea of the effect chronic diseases have on the people of our nation. To uncover the true impact, we’ll look at the three most prevalent chronic diseases within the United States: cardiovascular disease, diabetes and chronic respiratory disease.

Cardiovascular disease (CVD) has, for many decades, remained the number one killer of Americans. CVD continues to be an issue in our nation, largely due to the growing obesity epidemic, poor diet and a rise in Type 2 diabetes. The disease itself represents several chronic conditions related to the heart and blood vessels such as high blood pressure, congestive heart failure, coronary heart disease, atrial fibrillation and stroke. In the United States, over 102.7 million people have at least one of these conditions. Its projected that by 2035, that number will rise to 131.2 million, which will represent about 45 percent of the total U.S population.

Not only is CVD pervasive, it’s costly. Expenses regarding this disease include medical services via a physician, hospital and/or healthcare system. It also represents corresponding costs such as prescription drugs, home health or nursing home care. With its wide-spread impact in America, cardiovascular disease totaled $555 billion in 2016, making it the most expensive disease to treat.

Diabetes is not only a major chronic disease, but is also a contributing factor to the rising number of CVD victims. In America, 30.3 million people live with this disease, in addition to 84.1 million prediabetic adults. Individually, it’s estimated that diagnosed diabetics have medical expenditures 2.3 times higher than those without. In 2017 the national estimated cost of diagnosed patients was $327 billion. This total included $237 billion in direct medical costs and $90 billion in indirect costs such as absenteeism and reduced productivity. Overall, diabetes has increased economic costs by 26 percent within the past five years.

A contributing issue to both cardiovascular disease and diabetes is the rising epidemic of obesity among Americans. In 2017, the prevalence of adult obesity was greater than 20 percent across every state and over 30 percent in the South and Midwest regions. 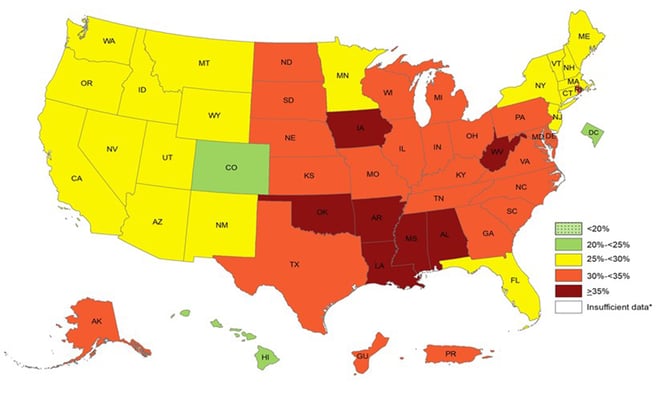 As for chronic respiratory disease, three-quarters of the Kaiser Family Foundation’s poll participants were aware that asthma is a chronic disease. However, asthma is only one of the chronic conditions that obstruct airflow and breathing. Chronic respiratory disease is a general term used to group diseases such as chronic obstructive pulmonary disease (COPD), chronic bronchitis, emphysema and asthma. Of these, COPD is the third most common cause of death in the U.S. It’s understood that over 12 million Americans have COPD, but up to 24 million have relative impaired lung function.

The primary risk factor is smoking, but also includes occupational dusts and chemicals, air pollution and family medical history. For many individuals with progressive COPD, end stages include worsening respiratory symptoms that limit the patient’s ability to perform daily tasks, or even rest without exacerbation. The cost of this disease can add up quickly, often causing 1 in 5 hospitalized patients to be readmitted to the hospital within 30 days of their release.

Together, these three chronic diseases make up the nation's top killers and consume a vast portion of the healthcare budget each year. Without innovative treatment, goals and intervention plans, these diseases will continue to burden the economic climate and reduce patient’s quality of life. Therefore, the World Health Organization (WHO) has initiated a Global Action Plan for the Prevention and Control of Non-Communicable Diseases (NCD) like these we’ve discussed. The targets of this initiative include:

These are just a handful of target goals that can improve lives and limit the negative impact of chronic diseases in America. What can you do to improve these conditions? If you are a Health Insurance Broker or Benefits Agent interested in providing unlimited chronic disease management for the three disease listed above, give Healthcare2U a call today.